The Clearview sign font is spreading throughout the Oklahoma City metro area. Within the past couple weeks, button copy signs on I-235 between I-40 and N. 36th Street have been replaced with Clearview signs. Also, button copy signs on Lake Hefner Parkway (OK 74) between I-44 and OK 3 West (NW Expressway) have also been replaced with Clearview. There are still a few button copy signs around the metro, but most of them are on the I-40 Crosstown section that will be replaced in the next few years. And we all know that when the new I-40 opens that the new signs will probably be in...Clearview. AAH!
Posted by okroads at 3:48 PM 2 comments:

Later today, I will be leaving for Fort Worth, where I will be spending the night before heading out tomorrow for some county collecting in East Texas. The planned route is as follows:

On this trip, I will collect 10 new counties and will clinch U.S. 175 in its entirety.

This will also be my first trip out-of-state in my brand new 2010 Mitsubishi Lancer ES! I bought it on Wednesday. I do still have the old Lancer (with 176,450 miles on it and counting) but I will be selling it to someone.
And here is the new official car of OKRoads... 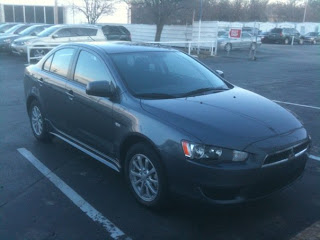