I am happy to officially announce a roadtrip this weekend! This trip will take us to Poteau, OK, via Perry, Tulsa, Fayetteville, and Fort Smith on Friday, and then back home on Sunday via U.S. 59, OK 9, and OK 102.

I have completed the separate highway pages from the May 25, 2009 roadtrip from McAlester to Davis to Oklahoma City. Note: some of these pages have pictures from other dates, but there are pics from May 25 on the page.

Recap of the trip: http://okroads.blogspot.com/2009/06/flickr-update.html

10 days to go til the ESKS New England Extravaganza Roadtrip 2K9! I will post the trip route in a separate blog today.

ES
Posted by okroads at 9:23 AM No comments:

The Picture of the Week has just been updated on OKRoads.com.
Also, I have finished writing picture captions for the May 25, 2009, roadtrip. I am still in the process of creating separate pages for each individual highway covered during that day; I will post the links tomorrow.
Also, Mrs. OKRoads & I may be taking a roadtrip this weekend. Stay tuned for more details...
Almost 10 days until we leave for New England!
Posted by okroads at 10:44 PM No comments:

I had the opportunity to participate in the OKC Road Meet on Friday night & Saturday afternoon. Due to work, I missed the Friday afternoon & Saturday morning/early afternoon activities.
I have just finished uploading the pictures I took from the meet. Most of the pictures are of old bridges in the area, including the old U.S. 62 bridge over the Canadian River, the old OK 24 bridge over Walnut Creek, and the old U.S. 66 bridge over the North Canadian River near Lake Overholser. Also included in the album is a picture of a yellow(!) Yield sign, near Lake Overholser.
Link to the Flickr album:
http://www.flickr.com/photos/okroads/sets/72157620680283402/
On another note; just 12 days remain until the start of the ESKS New England Extravaganza Roadtrip 2K9! The roadtrip itself will be 12 days long; so there are just as many days left until the trip as the days the trip will be.
ES
Posted by okroads at 11:27 AM No comments:

Something I forgot to report from my roadtrip earlier today...
OK 74A has been decommissioned in Norman. The highway ran along Lindsey Street from Interstate 35, through the University of Oklahoma campus, to U.S. 77 (Classen Blvd.). With the rerouting of U.S. 77 along Tecumseh Road & 12th Avenue N.E., OK 74A has been removed from the state highway system. Signs along Interstate 35 reflect this decommissioning.
This comes as no surprise to me; I think OK 74A should've been decommissioned long ago IMHO. Especially considering that its parent highway was decommissioned in Cleveland County in the mid-1980s. OK 74 once ran near what present-day Interstate 35 from OK 9 to Robinson Street, then took westbound Robinson Street to 60th Avenue N.W., then followed that into Oklahoma City (where it becomes Western Avenue) until S.W. 29th Street (U.S. 62 & U.S. 277).
Posted by okroads at 10:33 PM No comments: 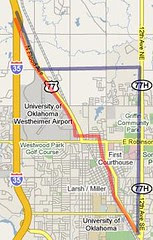 I took a mini-roadtrip today to Norman to see the new routing of U.S. 77 through the northern part of Oklahoma's 3rd largest city. Previously, U.S. 77 ran along (from south to north) Classen Blvd./Porter Blvd. from 12th Avenue S.E. to Robinson Avenue; Robinson Avenue from Porter to Flood Avenue; and Flood Avenue between Robinson and Interstate 35 at Exit 113. Now, it runs along 12th Avenue S.E. from Classen Blvd. until a newly extended Tecumseh Road, then takes Tecumseh Road west to Flood Avenue, then heads north on Flood Avenue to Interstate 35 at Exit 113.
Route:
I-44 West to I-40
I-40 East to I-35
I-35 South to Tecumseh Road
Tecumseh Road (new U.S. 77) East to 12th Ave. N.E. (new U.S. 77)
U.S. 77 South to just past the former southern terminus of OK 77H
U.S. 77 North to Flood Avenue (old U.S. 77)
Various streets in Norman
OK 9 West to H.E. Bailey Turnpike Spur
H.E. Bailey Turnpike Spur West to OK 4
OK 4 North to S.W. 15th St.
S.W. 15th St. East to Kilpatrick Turnpike
Kilpatrick Turnpike East to OK 3
Pictures have been uploaded to Flickr, and can be accessed here. I apologize for some pictures having the camera strap visible in the windshield; I didn't realize it until I got home. But the pictures are still of good quality. You may also notice that the pictures are larger than usual; I experimented with a larger picture size for all pictures taken today. (1024 x 768 instead of 640 x 480)
Posted by okroads at 5:00 PM No comments: 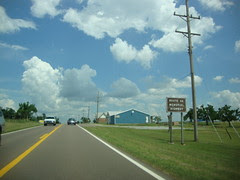 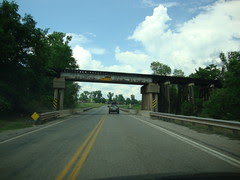 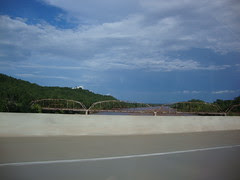 ES
Posted by okroads at 8:36 PM No comments:

I went to Midas last Saturday to have them check my "check engine" light which has been on and off for thousands of miles, and they told me that it could be just a glitch, and they reset the check engine light and told me to come back when it came back on. Well, on my way to work Monday morning, as soon as I passed the same Midas, the light came back on!
So today I finally got back to Midas, they checked it again, and it was just what they thought it was; the OKRoad-mobile (2002 Mitsubishi Lancer) needs a new front catalytic converter. Yay. That's several hundred dollars down the drain. I'll get an actual estimate on the cost on Monday, but since it has 166,000 miles on it & has been to 41 states since I got it 6 years ago, I think it's about time for a new OKRoad-mobile. So, after the New England roadtrip in July, I will begin car shopping! Yay! (hope you sense my sarcasm there) Thankfully I am taking a rental car on the trip, so my wife & I don't have to worry about how the OKRoad-mobile will do.
In other news, last month, I bought a new 12.1 megapixel Sony CyberShot camera (quite an upgrade from the 5.1 megapixel camera I bought in February 2005). I had a 1 GB memory stick already, but today I ordered a 4 GB memory stick for it. I ordered this so I can do a couple things:
Yes, I am hoping to take some road videos with my camera in addition to road sign pictures. I have yet to make a video but will probably start out with some of the local highways in Oklahoma City.
I am still working on captions for pictures from 5/23/09's trip from Oklahoma City to Warwick to Calvin. I have made it to Tecumseh so far, so not too far to go. Hopefully I will finish the captions tonight or tomorrow.
ES
Posted by okroads at 6:26 PM 2 comments:

For the first time in my life, I get to go to a road meet next weekend! There will be one in my hometown. Unforunately, due to my work schedule, I am going to miss almost all of it. :(
Then, there is a road meet in Indianapolis on the same day that I am planning to drive through there on the way to New England. Go figure. :D
ES
Posted by okroads at 6:16 PM No comments:

Tonight's blog contains a big announcement; the next OKRoads roadtrip!
The ESKS* New England Extravaganza Roadtrip 2K9!!
*ESKS is my initials & my wife's initials
Planned to take place July 10-22, the trip will have a couple of firsts for OKRoads:
The plan is to depart on Friday, July 10, take 3 days to get to Worcester, MA, spend 3 nights there, then depart for Bangor, ME, where we plan to spend 3 nights, before taking 3-4 days to travel back to Oklahoma City. The trip route & side trips have been planned out, but I'll save that for future blogs. :)
Posted by okroads at 6:29 PM No comments:

My current project on the OKRoads Flickr page is writing pic captions from the first day of a 3-day trip over Memorial Day weekend. The trip stayed entirely in Oklahoma. Here is a short recap of Day One:
Route:
Kilpatrick Turnpike East
U.S. 77 North
OK 66 East
U.S. 177 South
U.S. 270 East
On this day, my wife & I drove from Oklahoma City to Warwick (east of Wellston) for a wedding, then we went to Calvin (west of McAlester) to spend the night with friends. The weather was good for most of the trip, except for a brief downpour in Seminole. A total of 151 pictures were taken on this day.
Main page: http://www.flickr.com/photos/okroads/sets/72157618741434450/
ES
Posted by okroads at 8:02 PM No comments:

New Picture of the Week on OKRoads

For the first time since July 2007, OKRoads.com has an updated Picture of the Week! The picture is from my roadtrip to Florida in December 2008. Check it out at www.okroads.com!
Posted by okroads at 7:45 PM No comments:

I will be using this blog to post roadtrip recaps, announce new uploads to my Flickr page, and also for the occassional rant (much like the Road Rant on OKRoads.com was).

Let me first get started with the reasons why OKRoads.com & OKHighways.com have not really seen any updates in the last two years:

The good news in all this is that I never really stopped taking road sign pictures, and pictures taken since May 2007 are all on my Flickr page (http://www.flickr.com/okroads). Most pictures are from Oklahoma (go figure) but I also have pics from trips to Memphis in May 2007, Arlington & Dallas, TX in August 2007, and my honeymoon roadtrip from Oklahoma City to Key West, FL, and back, in December 2008 & January 2009. There are over 10,000 pictures on my Flickr page, with more to come from trips in 2006 (yes, I am 3 years behind on road pictures!).

This may be the longest blog post I ever write (that's why I'm not on Twitter because I type too much LOL) but I look forward to updating this blog frequently, Lord willing.

Posted by okroads at 3:49 PM No comments: